I’ve always thought that Bologna is a perfect movies’set: its porticos, the squares, the little streets of the city center, its colors and the suggestive lights make it a perfect place for movies’ stories. Our beautiful city has been main character and scenery to about 100 movies, sometimes a romantic location sometimes mysterious set to different stories since the 50ies. Maybe you’ve recognize Bologna in a certain movie seeing the Two Towers or Piazza Maggiore… I have been searching, though, the most unusual places where they filmed some movies’scenes. Let’s go and discover them together ☺

Under via Saragozza’s porticos there’s always a lot of life going on… its fascinating strong colors, the various shops and bars and activities that live under this long “hallway” have been a perfect set for various movies. Everytime I walk here I relax and feel the good vibrations of the city that in this street are particularly strong.

The porticos that start from Porta Saragozza and go up to the top of Colle della Guardia, where you meet the Madonna di San Luca’s Sanctuary, are the longest continuos porticos of the world, with its 3796meters and 666 arcades. Amazing! This quiet long walk it’s a MUST when visiting Bologna 😉 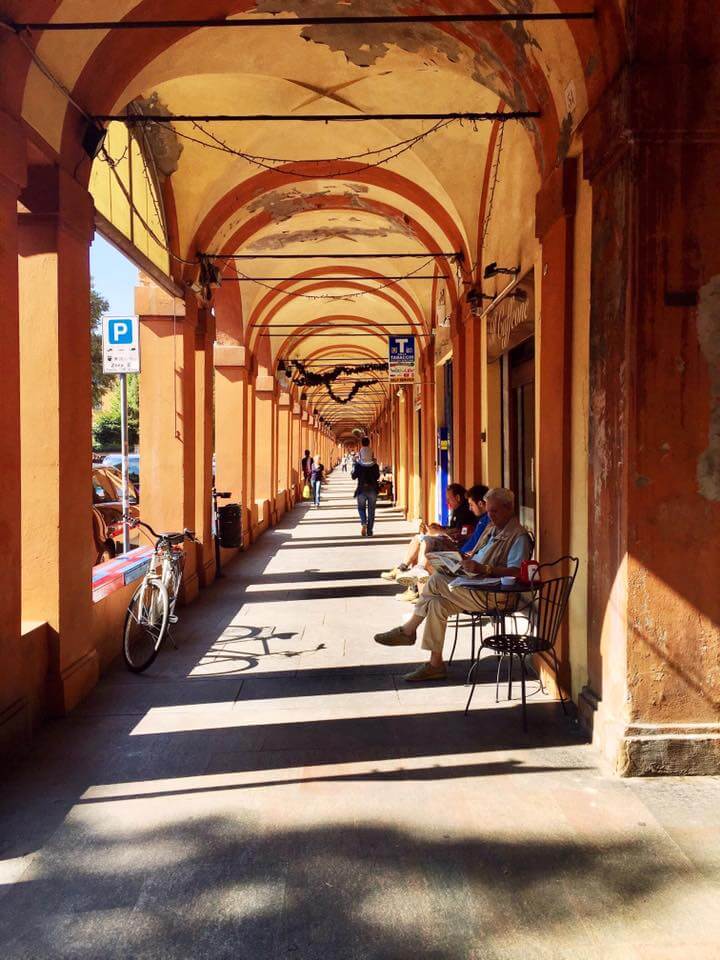 The Dallara Stadium is a place that the bolognese football lovers do love, but not only them. For this reason it was the place of some scenes of “Jack Frusciante è uscito dal gruppo”, a movie that narrates about a group of bolognese teenagers.

Originally it was called the “Littoriale” and it was actually the first Italian modern stadium. It was inaugurated in 1927 with its Torre di Maratona that stands out, representing competion and the athletes’ strenght. The stadium was then renewed for the Soccer World Cup that took place in Italy in 1990. Walking or running around the stadium under its nice porticos it’s really a pleasure… then obviously I suggest you to go up until San Luca 😉

Tip: take a coffee and brioche at  Bar Billi wich is the hystorical stadium’s bar, a real institution where you will feel the most authentical bolognese mood ;). 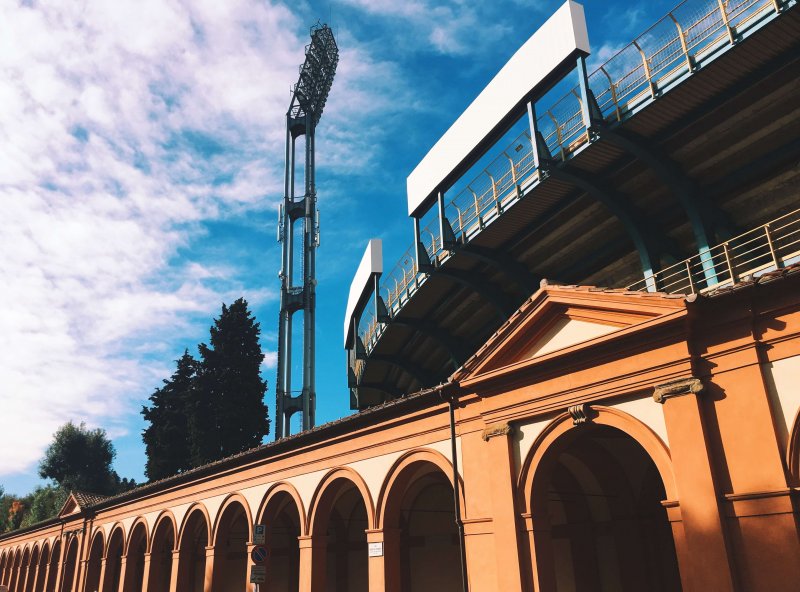 The modern area of Fiera District has been also set of some movies’ sets.

The constructions of these buildings started between 1964 and 1965 and the first block hosted the 29th Trade Fair of Bologna. After there was an important extension in 1972, thanks to the famous japanese architect Kenzo Tange who made realize the skyscrapers that then became one of the city’s icons. I really like those white buildings that stands out the blue sky, I think that in their simplicity they are really fascinating. 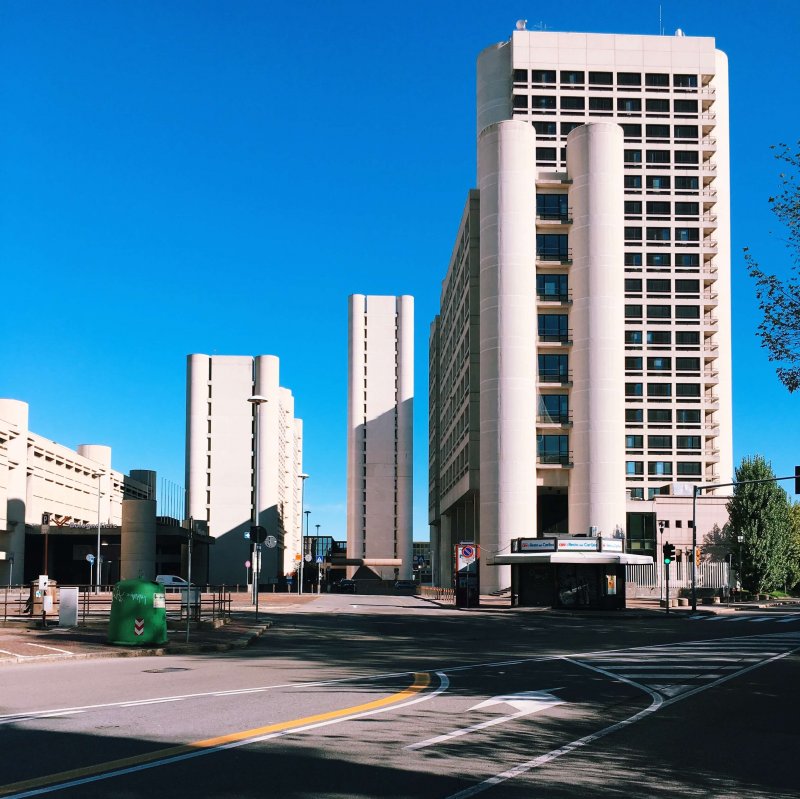 This movie talks about events related to  Radio Alice, the free radio station that had its quarters in via del Pratello.

Via del Pratello it’s the most “free” street of Bologna, an hystorical and popular bohemienne area where life is really lively, especially at night. Here there are a lot of bars, pubs, restaurants and places for typical and yummy fast foods beside vintage shops, artisanal labs and headquarters of various associations. Mostly all Via del Pratello is for pedestrians and has colorful houses… a place where you can feel the most alternative vibes of Bologna.

Even the famous English magazine “Sunday Times”, wrote that Bologna is the Italian hipsters’ city and said that via del Pratello is the most representive area of this mood! 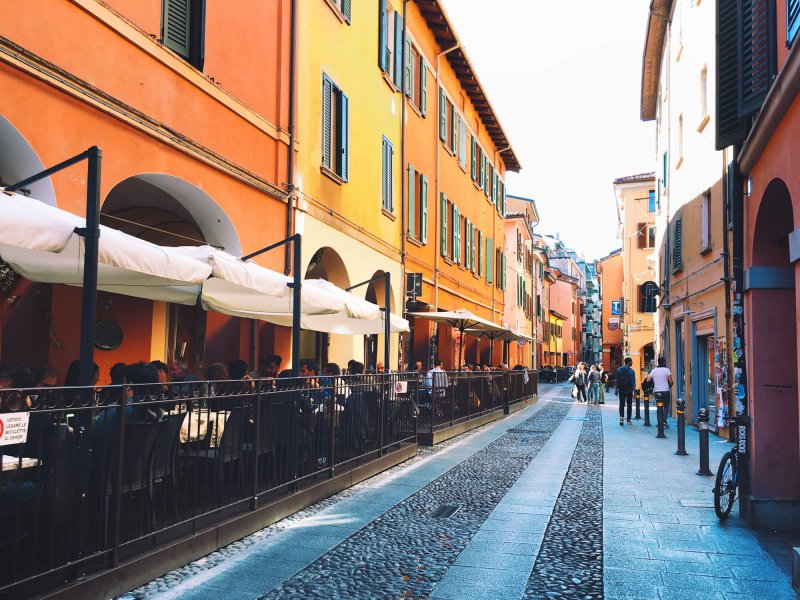 Obviously even the trains’ “Stazione Centrale”, a symbolic place for departures and arrivals, has been set of some movies. This station is really in the middle of Italy, it’s a particular place for always on the run, crossroads of people and their stories… people that wait, meet and say goodbye. I suggest you to go and watch the station from a particular point of view, from the top of one of the bridges that go over it: from both Ponte di via Matteotti and the one of via Stalingrado (where you’ll find also amazing murales) you’ll have a special glance!

Another tip? Go there for a special sunset <3 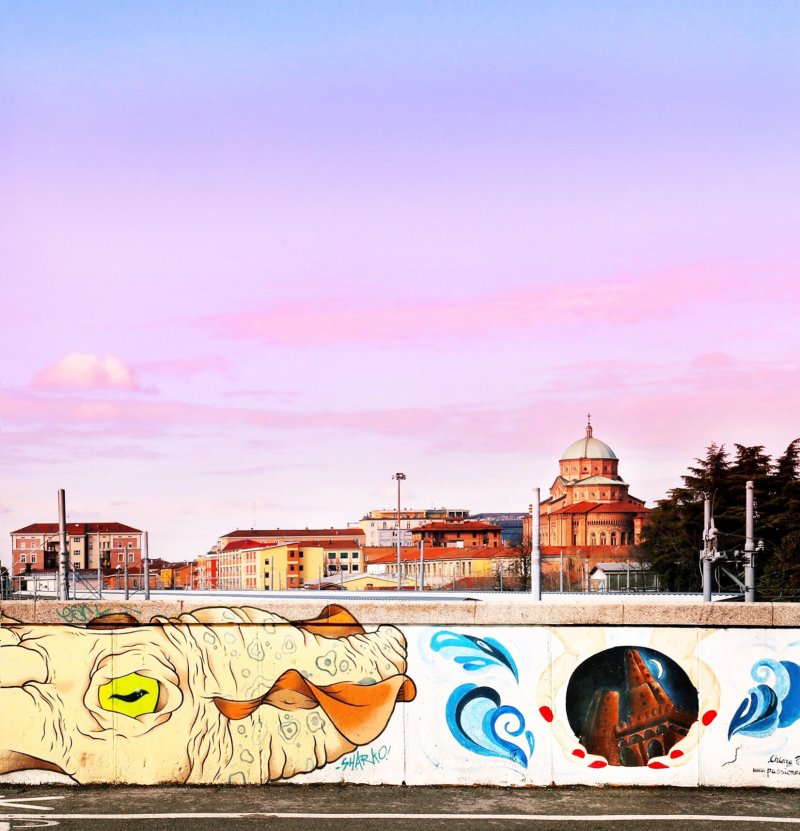 I love to go arounf the city and think about all the stories that took place into those movies, but then I also think about how many incredible events which I don’t know took place in the rea life! Indeed life is usually better than a movie 😉

Thanks to Open Fiber (www.openfiber.it) that let me discover my city from this particular point of view!
All these areas I talked about are covered by the new optical fiber that has just arrived in the city! Watching movies online, with the super fast connection of Open Fiber, will be fantastic!